The 2012 fishing season opened on April 15th and if you were fishing black salmon on the MSW Miramichi,it was likely a very memorable one! The season opened on a Sunday and there were a lot of salmon fishermen out on the water all up and down the Miramichi. Some were fishing from shore,while others were fishing from a variety of boats but the common denominator was the fact that everyone was catching fish. What a fantastic fishery we have in the mighty Miramichi and her tributaries! I just can't
say enough about how lucky we are to have such great fishing in these rivers. I have been fishing the Miramichi River for over forty years and I have to say that was the best opener I have ever had in all my years of fishing spring salmon. I was anticipating that the opener would yield some great fishing if the weather held but it turned out that the fishing was much better than I thought it would be. Even though fishermen were out in droves,everyone was hooking fish and most serious fishermen had no problem limiting out on the first day. Day two was mostly a repeat of the opening day with many fish caught and a good number of sports limiting out. It started to slow down a bit after the first couple of days because the water raised a bit and got a bit dirty but the fish were still taking if you had the right flies and the right technique.
I limited out by 8:30 AM and my lady fishing partner limited out by 10:30 on the first morning. I was fishing again this year with Donna A. and she did very well the first day and it turns out she is also a very good net person. I told her uncle Allen,who is a good fisherman and guide himself,that she handled a net as good as him or better! He took it all in stride and said he taught her everything she knows! The following photo shows Donna with one of the first fish she caught on opening day. 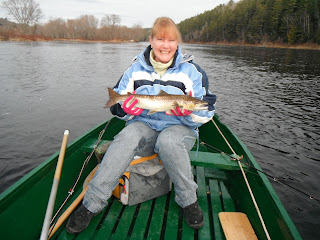 The fish were coming fast and furious that morning and the next photo shows Donna going ass-over-kettle while I was trying to take a photo. 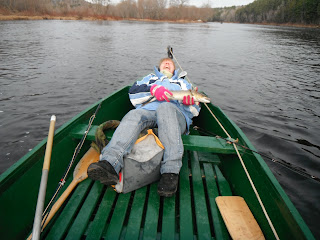 At times it was hard to keep things straight because we had five doubles the first morning. The next photo shows me with a nice salmon taken on the first day. 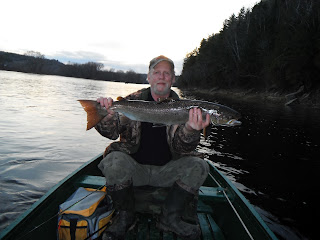 I wasn't the only one hooking big salmon in my boat. The next photo shows Donna with a nice salmon she took on a number six Grey Ghost. 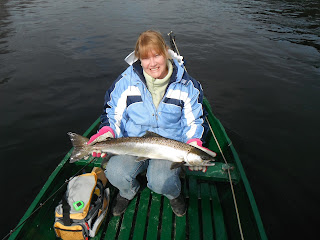 I caught three salmon on the first day that looked as if they were clones. All three fish measured in at thirty one and a half inches and had great color and stamina. The following video clip shows me landing a grilse early on opening morning.
The second day was pretty much a repeat for me in terms of fish landed. I limited out by lunch time and my fishing partner,Donna,landed four. By Tuesday,the third day of the season,the water was starting to rise and it got a bit dirty but the fish were still taking. I caught fish every day the first week and ended up landing forty- three fish in five half days of fishing! That was a personal best for me and I doubt I'll ever top those numbers but you never know. I do know one thing for sure,I have never seen as many fish on opening day and that speaks volumes to the health of this fishery.
I only fished two flies during that week. The first was a rabbit strip fly that a large salmon took after after I landed fifteen fish on it. The second fly was a yellow and green Maribou with some blue crystal flash. I am a huge fan of these two types of flies,especially the Maribous. The last few years I have been using them almost exclusively during the spring season. I think the fluttering action of these flies will many times entice a fish to strike, especially when the fly is fished deep and swings right by the fishes nose. The next video clip was taken in Doaktown after we finished fishing on the first morning.As you can see in this short clip,there was no shortage of sports on the water. One thing I noticed this year was the number of lady fishers on the water. I think this is great for the sport and I hope their numbers continue to grow. 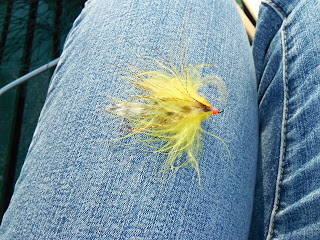 This is a photo of one of the maribou patterns we used the first week of the season.
We are getting a real downpour as I write this bit of blog and I am guessing the big raise of water that will come is going to flush a lot of the fish down river. There will still be a few fish around above Doaktown but if I was serious about catching some fish after this big rain,I would be fishing in the Blackville area. The fish will slow down and hang around for a bit in the deeper water down river.
I would expect to see some sea-run trout early in May this year and we will be watching the Cains and the MSW Marimichi for signs that the run has started. I received an interesting report from a fisherman in the Minto area who said that one sport fishing the Newcastle Stream for trout hooked several grilse in the pools behind the old DNR building. I assume these fish are some of the landlocks that were stocked in Grand Lake the past few years and local fly tier and fly fisherman extraordinaire,Ralph Goodwin, says these landlocks will spawn and I guess that's a good thing because most tributaries of the Saint John River have had their sea-run Atlantic salmon numbers decimated by the aquaculture going on off shore in the Bay of Fundy.
Ken and I will be putting the fishing on the back burner for a while as we prepare our bear baits and scout our spot and stock area. We have some very nice bear in our area and any sport should have no trouble taking a bear such as the following one that Ken took early in the season a few years ago. 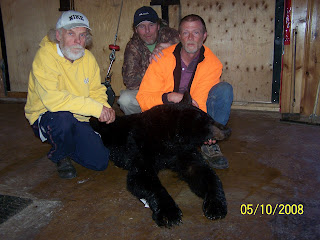 This bear would be considered an average bear for New Brunswick but we have much larger bears roaming the areas we guide in. Most times,these big trophy bears are much harder to take but Ken and I have a couple of tricks up our sleeves that help to bring those big boys in during shooting light. I will post some trail cam pictures in my next blog of some of the bears hitting our baits.
Our spot and stock area holds a large number of bears and young Jamie is a great guide on this type of hunt. Jamie has seen as many as fifteen bears while scouting this area out and some of those bears were trophy size. But again,these big bears don't stand around dumb and wait for you to shoot them. You have to be vigilant and watching sharp so you can spot them before they spot you or they are gone instantly. Having the wind in your favor is a must when doing a spot and stalk hunt because these big boars won't hang around if they get a whiff of human scent. Our deer population may be down the last few years but,if anything,our bear population has grown during the same time frame so don't hesitate to give me a call or shoot me an e-mail if you are interested in one of these bear hunts.
Last week I was in Moncton for a visit and I stayed at the Best Western which is a stones throw from Crystal Palace in downtown Moncton. As I was leaving I noticed movement in the vegetation beside the parking lot and there was a pair of pheasant foraging about completely unconcerned. I was quite surprised to see these birds especially in the heart of Moncton but apparently they are a common site in that area. These birds had a good winter last year and I suppose it helped many birds survive the rigors of our Maritime winters. Ken was out for a drive around the Harley Road and spotted a nice male pheasant beside the road and got a photo of it. The males have beautiful plumage and the following photo shows the striking colors that these beautiful birds display. 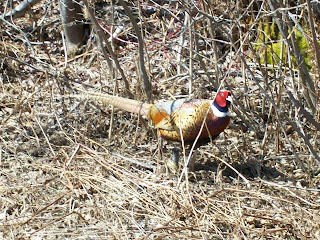 I had the opportunity to pick up some nice vintage items with an outdoor theme this past month and I will start off with a nice childs piggy bank that displays different birds on each side. There is no manufacturers mark and I'm not certain of the age of this item but it displays quite nicely. Just click on the photo to enlarge it for a better view. 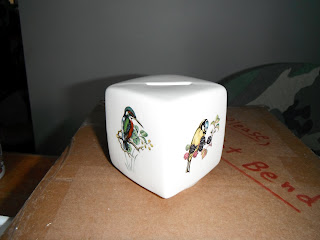 The next photo shows a carved fish done by an artist from Quebec. I picked this item up at a flea market in Moncton and got it at a very reasonable price. I would say this piece was done in the Sixties. 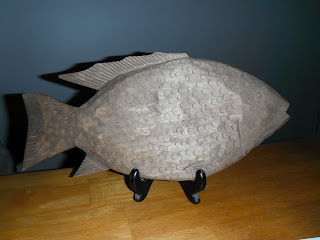 Finally,the next photo is one of a great print I picked up at an antique show last week. This print depicts a retriever nearly catching a mallard duck but only ends up with a few feathers. This print was published by Hallen&Weiner of New York and is circa 1900. 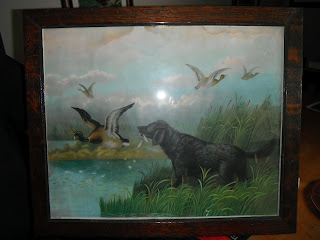 Although this print has slight water stain at the top,it doesn't detract from the print as it tends to blend in with the clouds. It also features a very nice oak frame.
I would encourage any sports looking for a day in the bush or out on the water to give me a call or shoot me an e-mail to arrange an excursion for any of our native species. Our guides have extensive experience pursuing all species of game and fish in our area.
Until next time,this is Dale Bauer saying 'Happy Trails to You.....Until we meet Again!'
at April 26, 2012 No comments: