HARD TIMES IN THE MARITIMES!

I've finally found the time to sit down at the computer and write a bit after what has been a hectic,nerve-racking month. Things actually started going sour around April 15th. The Miramichi River took it's time breaking up and the first couple of days of the spring salmon season were a total write-off. A short window of opportunity opened up in the middle of the week , then rain and high water blew it out again. When the first of May rolled around we got our second freshet brought on by 60+mm. of rain. At this point, the situation went from inconvenient to serious. My pumps never shut off for two weeks and had to be checked on the hour for a blockage or break down. If a person had to deal with only this situation it would be one thing but when you have a busy life besides, it wears you down quickly. The only solice, if you could call it that, was the fact it could have been worse. This was quite evident when viewing news reports of the flooding in Quebec. Still, it was pretty bad here. I would say the water got as high as it could without causing major damage. I was literally surrounded by water on two sides and it stayed that high for weeks.This is a short clip showing water levels in Fredericton.

The whole Grand Lake Basin was over flood levels and hundreds of  homes and thousands of people were affected. My stress level was raised considerably but all you can do is batten down the hatches and wait it out. After a while, things went back to normal and a collective sigh of relief could be heard in all the affected areas. This photo shows my front beach under water right to the top of the bank. 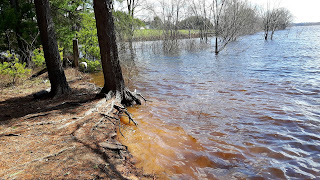 Here is another photo of the 2017 flood. 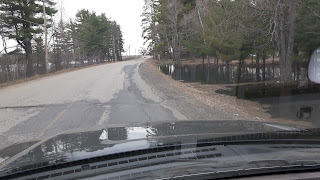 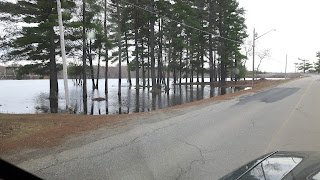 As you can see from these photos , this spring has been wet, cold and miserable. This cold weather delayed the start of stipers spawning in the lower Miramichi  by two and a half weeks. Last year spawning activity got going on May 12th.  One prominent salmon outfitter on the Miramichi River went on record as saying the spring of 2017 was the worst he had seen in his 17 years of operation. The worst water and weather conditions. He also confessed to having his lowest catch numbers ever. I must commend this outfitter for "telling it as it is". That being said, this outfitter's clients still caught some great fish. You just can't beat the Miramichi for trophy fishing. Here is a photo of a young lad with his catch from the Miramichi River. 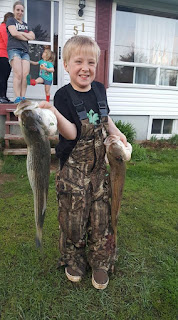 This next photo shows spawning stripers churning the water up at Millstream on the Northwest Miramichi  River. 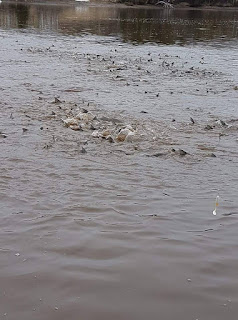 .The spawning variance is now in place and angling is prohibited from the Red Bank bridge down river nine kilometers. Outside these boundaries, good striper fishing can still be had and two slot fish can be retained after June 15th.. The annual Striper Cup was held recently and the winning team had four fish totalling 70 lbs. The lunker striper came in at just under19 lbs. This controversial fishery continues to grow in popularity and draws fishermen from all points of the province and that can only help local businesses grow.
The white perch and sea trout runs are just getting started in our area and the last fiddleheads in the more shaded areas are starting to peak through. This photo shows a feed of white perch from Salmon River. 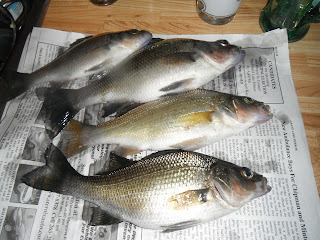 The water is still unusually high and cold for this time of the year but better conditions are just around the corner. The first week of June usually sees good sea trout fishing on most rivers and streams and this is the time I like to be on the Miramichi River. The next photo shows a couple of average sized sea trout I kept for the pan. 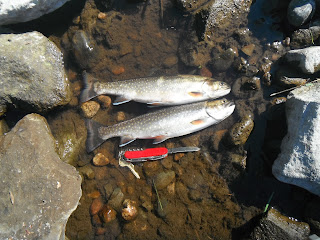 This next photo shows some commercial fishermen setting gaspereau nets in Grand Lake this past spring. This was weeks before the flood..Hard times in the Maritimes! 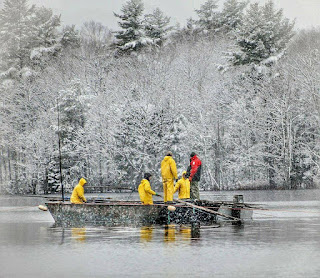 The cold and wet spring slowed down bear activity at our baits but things are starting to pick up after a few warmer days. Some resident hunters have taken some nice bears already despite a slow start. A hunter from farm country in the central part of the province killed the earliest bear I heard of on a spot and stalk hunt over green fields. It was taken around the third week in April. This is very early,especially for having the cold spring this year. Kens nephew Jamie killed a nice boar yesterday when he was helping Kenny bait. This bear was quite stubborn and wouldn't move off of the bait so Jamie used one of his tags and removed him. This happens when you get a lot of competition at a bait site with multiple bears coming in. This is a real problem for guides trying to run baits quickly and efficiently while keeping one eye out for ugly bears. Things usually get resolved one way or the other. I'll talk more about this and other bear hunts in my next post.
Ken and I have tags for zone 17 during prime time. Any sport wanting to take a bear with us just contact me through this web site or on facebook.
This is Dale Bauer saying "Happy Trails to You......Until we Meet again!"
at May 31, 2017 No comments: