This month has been a beautiful one here at home on Salmon River and in the Grand Lake area.There has been lots of sun and the temperatures have been soaring for most of the month.This makes for some great days at the beach,but it has really taken its toll on the trout and especially the salmon.Atlantic salmon just can't take high water temperatures and they will seek out cold water refuges at the mouth of brooks and any cold water springs.The Salmon River has been holding at a good level and we haven't hit our normal summer low yet.Usually,in a normal year,when the salmon fishing starts to slow down because of low water and high water temperatures,Salmon River and Grand Lake and its network of lakes and channels is just starting to produce some good days for large pickerel and perch. Grand Lake is a very underutilized fishery with great potential for producing trophy fish of several different species. 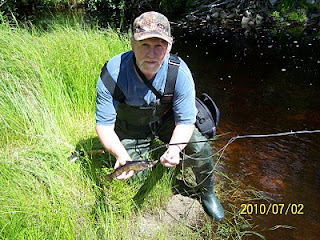 This is a photo of me with one of the nice pan-sized brook trout that Kenny and I got earlier in the month.We fished two different spots and caught well over one hundred of these beautiful little trout. We were sure to pinch down our barbs so we wouldn't kill any unintentionally. Ken and I both agreed that a day of trout fishing like we had was as much fun as any fishing we have had,including salmon fishing trips. The places we fish receive very light fishing pressure,many times only from us,so there are lots of trout in these remote streams and beaver ponds to be caught and what these little guys lack in size,they more than make up for it by their sheer numbers and the non-stop action they provide! Here is another photo of Kenny with one of the brookies we got while on our trip earlier in the month. 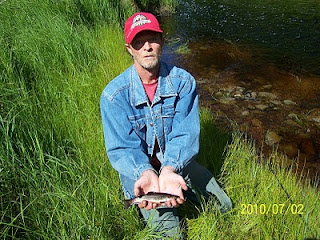 As I mentioned earlier in this post,the Atlantic salmon have been suffering greatly for the past couple of weeks and are only now showing signs of relief. The moderating temperatures and recent rainfall has been a godsend for both the salmon and the outfitters over on the Miramichi. I really feel sorry for those guys over there because for many of them,salmon fishing is the only game they play. That means if they can't fish because of the harsh conditions,they don't eat! On the other hand,they have paying customers waiting to fish the salmon that they must protect, so these outfitters must walk a very fine line. Most opt to limit fishing to the early hours of the morning,while the guides make sure if someone hooks a fish, they don't play it too long. Salmon anglers are, by nature,a serious lot and they understand just how fragile the salmon are when they are holding in warm water,so they are usually satisfied to get in a little fishing and just enjoy the fact they are on one of the most beautiful salmon rivers in the world! The big pickerel bite is just getting nicely started here at home on Salmon River. All the gaspereau are finally out of the river,so those big boys will start to cruise around looking for an easy meal. Kenny and I have come up with some lures and techniques over the years that ensures that we are into some fish most of the time. We always practice hook and release on these large pickerel because it takes a while to grow them to trophy size and we want to catch them as many times as possible.A good -sized pickerel in our area would be two feet in overall length and at least three and a half pounds. 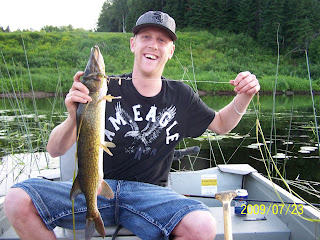 This is a photo of my son Curtis with a nice pickerel he got last year. We usually get some in this range every time we go out,when the conditions are right. I really like fishing pickerel and I can honestly say I don't prefer salmon or trout over the lowly pickerel just for the simple reason he can usually be coaxed into striking and there are lots of them in our area,so that means lots of hook-ups. After all,isn't that what greenhorns and pros' alike are hoping for? I know I can speak for all of us  here at home on Salmon River when I tell you we have a ball fishing for pickerel and if anyone is looking for a great day of fishing,just give me a call! The Striper bite has started early this year,as has been the case with most species this year.We got reports of large stripers entering the St John River system from the middle of June and later on. When you have seasoned striper fishermen breaking off fish while using fifty lb. braided line,you know darned well there are some huge fish being hooked.The striper fishery in the St.John river had been a well kept secret until the last couple of years.Before that there were just a few hard-core striper guys down around Reversing Falls in Saint.John. That all changed when the Fishin' Canada show filmed two episodes on the lower Saint John River and showed folks the nice stripers that could be caught in their back yards.The fishing forums also helped to spread the good news.Soon there was a whole new wave of eager striper fishermen and they started catching some nice fish, too! Two of these guys new to the striper game are Eddy Speakman and Corey Shirley,both of Chipman. They are old pals both nearing retirement and decided to take up fishing stripers last fall. They managed to get a couple of ten pounders and a nice one of twelve pounds. Now both of these gents are past presidents of the Chipman Fish and Game Association and Corey is also past president of the New Brunswick Fish and Wildlife Association. So its safe to say they are experienced fishermen,but I don't think either of them was expecting any big surprises when they decided to try the bridge at Jemseg to see if any of the big stripers that had passed through the falls two weeks earlier had made it up that far.From what I've been told,they didn't have to wait very long until Eddy got a heavy bite and was hooked up to a large striper.At one point the fish was actually towing the boat around! Eddy finally got it boated with some of Coreys help and when they got it on the scales, it topped out at thirty-eight lbs.! Not too shabby for the start of their second season! There have been stories like theirs up and down the river the last couple of years.Sometimes it's stripers and sometimes it's the muskie bite everyone is talking about. Both are smoking hot new fisheries here in New Brunswick and trophy fish can be caught in the middle of the city in downtown Fredericton.So expect to here lots more in the future about the striper and muskie fisheries. I have been collecting vintage outdoor memorabilia for many years now and I thought some of the readers of this blog might be interested in seeing some photos of the really cool stuff I have picked up through the years.I started collecting this stuff because I liked it but it soon got out of hand and I've been packing a lot of it away to sell when I retire.At least that's the plan.I know there are some things I will never be able to part with and the paddle Kenny made for me is one thing that will stay with me and be passed on to my son. Here are a couple of photos of the paddle he made for me a couple of years ago. 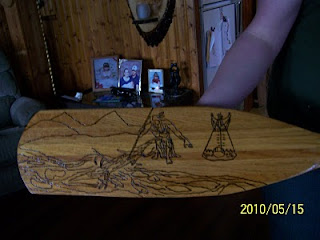 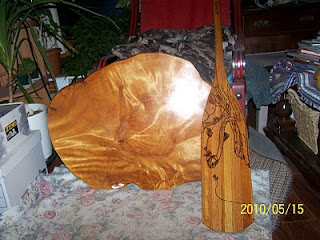 Ken has been working with wood since he was a youngster. His Dad,Wesley,was well known for the axe handles he used to make and I guess Ken just picked up on some of the stuff old Wes was doing.I mention to ken one day that i had to buy a paddle and I was discussing the merits of buying a cheap one verses spending some money on an expensive one.After much discussion, Ken finally proclaimed that he could make a paddle that was better than any I could find on the market.Now that's quite a statement to make,so I said you go right to 'er and I'll be the judge when you finish it. Ken invited me along to get his materials which he picked up at a cabinet shop in Minto.All he got was some strips of hardwood left over from the saws that was being discarded. He took the strips of oak,maple and birch home to his wood shop and carefully glued and clamped them together until he had a sturdy hardwood board that he sawed and worked until he had the shape of the paddle.That's when the serious work began as he carefully shaped that paddle until he had it where he wanted it.To finish it off,he burned scenes on both sides and burned my name in the handle.When this was done,he carefully applied six clear coats of lacquer over the whole paddle. The finished product was a thing of beauty,but I told Kenny I would never be able to judge how sturdy it was because it would never see water to take a stroke. Today,it occupies a prominent spot on my wall and stands as a testament to Kennys skill as a worker of wood. The other object in the photo with the paddle is a slab of burl with flame all through it. This will be the top for a beautiful table in the near future.I will be showing more photos in future posts of some of the other interesting objects I have collected and will have for sale in the near future.Although I don't plan on retiring for at least a couple of years yet,if anyone sees something they like,don't be afraid to contact me if you want to discuss buying anything you see here. Ken and I and the rest of the guides that work with us encourage you to send me an e-mail or give me a call to arrange to spend some time in the Big Woods of beautiful New Brunswick. It's all there for the asking! Happy Trails to you......Until we meet again!
at July 25, 2010