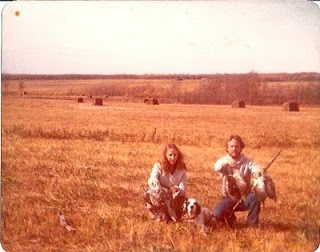 Here is another photo of me and my brother Tim after a three hour shoot in the Beaton River valley in B.C. This valley was the most game rich place I have ever hunted. 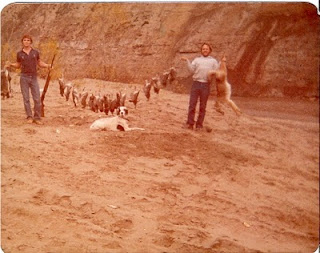 Another great hunting dog I owned was a German short-haired pointer named Joma.She was a female and was the most head strong dog I have ever owned but also one of the best gun dogs I have ever shot over. She was an excellent retriever and did a super job on woodcock and grouse. I sent her to Sioux City,Iowa to have her bred to Fld. Ch. Brown L's Jet, a field trial champion from a great lineage and she had a beautiful litter of six pups.My original plan was to keep a nice male pup and sell the rest to cover the cost of breeding.That plan didn't work out too well because I found that not many gunners were familiar with the breed here in N.B. at that time and I ended up giving away all of the pups but two at the farmers market in Fredericton! Some people got some super dogs at a super price! I kept the pick of the litter to give to my beloved grandmother Boyd,as she loved GSP's and this dog had champion written all over him. She kept Bruno until she had to move into the old folks home where she wasn't allowed pets. I didn't have any room in the kennel at the time,so I gave the dog to a local houndsman who was familiar with the breed and took good care of his dogs. He later told me he and his partner shot a dozen grouse the first time he hunted over him and he said Bruno was the best gun dog he had ever seen. I would have to agree.He was a magnificent animal to watch working a cover and he was rock solid on point. I had started all the pups with Joma and they followed Mamma's lead perfectly. Bruno met his fate one day from a bullet from a neighbours gun after he got loose and went to check out the guy's ducks.A sickening end to a dog that was probably more valuable than the creep who killed him.The houndsman was outraged and the guy was lucky to keep his hair and if the owner had known for sure who did it,I'm sure we would have read about the aftermath of this fiasco in the local papers. Unfortunately,I don't have any good photos of these dogs,but I do have a picture of one of the best retrievers I have ever hunted over. 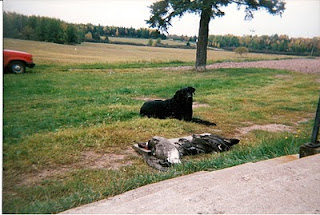 Cain belonged to one of my duck hunting partners and was the biggest ,strongest,hardest-working gun dog I have ever had the pleasure of hunting over. Rodney L.,my hunting partner,had asked me to help him train the dog and I told him there was no shortcut to success when training gun dogs.I told him the main thing was the trainer had to be smarter than the dog.That may seem like a cute remark to some but it's really a true statement.If you loose your temper or get frustrated with the dog and react with emotion,the dog will defeat you.I explained to Rod the basics and told him to be consistent in his training regime.He asked me what the most important commands were and I told him to work hard on "come "and "stay" and the dogs natural ability would take care of the rest. Rodney did a great job training Cain,considering it was his first dog and he had no experience at the game.We hunted over Cain for about five seasons before he was struck by a car and was laid to rest.In those five years Rod and I killed around four hundred and fifty ducks and dozens of geese over Cain and I made Rodney a plaque to remember and record Cain's accomplishments in the field.This is another photo of Cain at the duck camp we set up each year on the McGill Meadow. 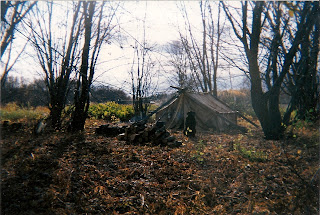 The last good dog I hunted over was Jamie's dog, Whiskey.He was a Golden retriever out of good stock and I would have to say Whiskey was one of the best all round dogs I have had the pleasure to know. He was just coming into his own when he was killed,yet again,under the wheels of a vehicle. Whiskey was one of those dogs who was a wonderful pet and hunting dog.This is not something that always occurs when owning a gun dog.Sometimes they are great gun dogs but are poor pets and vice versa.Whiskey was one of those dogs that had it all and even writing this I get sentimental about him.This year Jamie is still feeling very sick when he thinks about Whiskey because he now realizes just how special that ol' Whiskey was as a gun dog and pet. 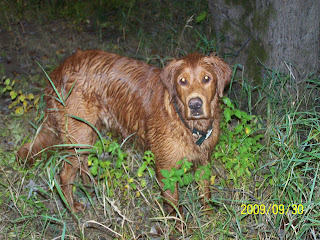 So readers,if you take nothing else away from this bit of blog,make sure you have control of your gun dog at ALL times.I have owned and bred dozens of gun dogs during my life and I can recall only one dying of natural causes and that was my GSP,Joma.

We had some great pickerel fishing this year at the end of summer but it has pretty much come to an end.Right now,the striper bite is starting to heat up and Corey S. and his fishing partner Eddy S. landed two nice ones last week weighing in at 19lbs. and 15 lbs. Corey says there are a lot of stripers in the Gagetown area but there are so many eels migrating out to sea throughout the system that it is making hooking up rather difficult.Corey says after the eels clear out, the fishing should improve until the water temperature drops to the 40 degree mark,then the bite pretty much dies out.

The fall run of salmon has started in earnest on the MSW Miramichi and if the water conditions stay good,the fishing should be great,as there are a lot of fish in the system and more fresh fish entering the river daily.The lower Cains River is starting to turn on with some nice hook-bills being taken in the river from the Sabbies River down to the mouth. With the recent rain we have had,I expect to see some fish arrive in the upper stretches within the next two weeks.The Cains River is a beautiful salmon river to fish in the fall and if you have never fished it,you should make it a point to do so.

I have a couple of very nice vintage items to show my readers this month,the first being a beautiful coat rack that Kenny made for me a few years back.Ken made the plaque out of a nice piece of pine and he spent many hours burning in a scene of very detailed songbirds.What really caught my attention with this piece was the wood grain in the pine that looks like the head and beak of a duck.If you look closely,you can see it in the background behind the songbirds. 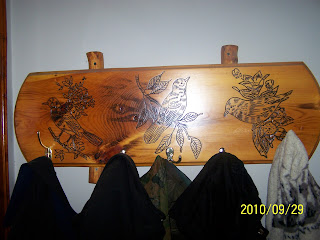 Ken added some brass hardware and a couple of split pine branches that he peeled and used for hangers.He has made a few of these hangers,with some being used in a local restaurant.These hangers require a lot of painstaking work on Kenny's part and he says he never gets paid for the hours of work he puts into the finished product but he gets a great deal of satisfaction from knowing he has produced a nice work of art that will retain its value into the future.
The next items in the following photo shows a couple of decorative "carnival" pillow covers I picked up in the Chipman area.These covers were sold at the local fair and at the gift shop in Chipman during the Sixties as souvenirs. They used to be quite common one time but are now getting hard to find and I'm lucky to have picked up these ones in my travels. 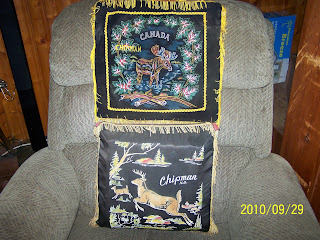 I'm a little late publishing this latest blog because we are really busy at this time of the year but I will try to get back on schedule with my next installment. If any sportsmen out there would like a trip to New Brunswicks' Big Woods,just give me a call or drop me an E-mail and we will make plans for your trip of a life-time. Happy Trails to you--until we meet again!
at September 29, 2010