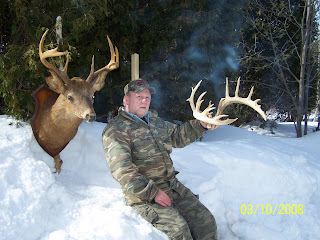 Whenever someone askes me what was the biggest buck I ever killed,I always say it was a nine point buck that dressed out at 230 lbs. Now that is a pretty big buck even for our standards up here in New Brunswick,but as you can see from the photo in this latest post,I've killed deer with much better head gear than the deer I always say is my biggest.The horns are big enough for entry in the New Brunswick record book as a non-typical.But that buck only dressed out at 192 lbs. and I never think of it as my biggest buck. I've killed several bucks that dressed out over 200 lbs. and I even threw the horns away on some of them because I just considered them to be average 7 or 8 pt. racks. So I guess it's safe to say that quite a few hunters consider the dressed weight of their bucks as the guage as to whether its a trophy or not. The 17 pointer that I'm holding was killed in Coal Creek, 7 kms. north of the Pioneer Lodge.This was and still is a great area for large white-tail bucks. There have been a couple of Boone and Crockett bucks killed in this area,both typicals and non-typicals. Old Charlie M. of Coal Creek has killed some great bucks in his back yard,literally. His mother,who homesteaded on Coal Creek and used to spear Atlantic Salmon every fall,killed her best buck when she was 80 yrs. young,a huge ten pt. that dressed out at 240 lbs. This buck was just shy of the B&C record book as a typical. But if you asked Charlie or his mother what her biggest buck was they always say 240 dressed,even though this buck had a great set of horns. With the winter slowly starting to turn to spring,we are getting some reports from the DNR biologists and they say we will experience winter losses of 10-12% of our deer herd.These are fairly normal figures and small deer will make up the largest share of the deer that don't make it.So Ken and I are looking forward to looking up those big bruisers that we have been chasing around and we are predicting another great deer season in 2008. We'll see you all there!
at March 10, 2008