New Brunswicks 2010 deer season is now one for the books and according to the numbers,it was a season very similar to the last one in terms of deer killed. The weather this year wasn't good for hunting by any measure and I'm sure this had a lot to do with the low numbers tallied this season. We had a lot of rain and many days the wind was blowing hard. This,combined with above average temperatures,kept the deer laying low and hunters out of the bush,choosing to drive around and staying comfortable in their vehicles.
Our crew hunted hard,especially the last week of the season and we found both the hunting conditions and the deer numbers to be very disappointing this season. We started out,as usual,hunting the big woods of Gaspereau River and the Harley Road,which is on the eastern side of Salmon River. It didn't take long to realize that the deer continue to suffer a miserable existence in habitat dominated by Jack Pine plantations and too many moose. We usually concentrate on the different brooks and drainages in these areas and hunt the ridge lines that accompany this type of habitat. Many times these drainages hold the only decent habitat because of the buffers left along these brooks and the deer will use these spots as travel corridors,following the ridge lines when moving around from one area to another. These big woods bucks are having to travel further all the time because of the dwindling deer numbers and this makes it harder to catch them when they get running around looking for does.
Kenny once again proved his worth as a guide by setting his cousin Duane up on a nice track in the area I got my buck last year.I have talked about Duane in previous posts and I spoke of his being in the Canadian Armed Forces. Because of his career in the military,he just doesn't have the time to scout and prepare for the deer hunt,so Ken does the scouting for him and helps get him set up on his post.Duane is a sitter and he has been greatly rewarded for his patience over the years,having taken many nice bucks while hunting with us.This year was no exception as he took a very nice buck,having only posted for about forty minutes before the buck stepped out at eighty yards.He hit the buck in the front shoulder and he dropped on the spot,which is always nice because it's not much fun trying to track down a poorly hit deer in big woods that run for miles.The following photos show Duane with his 2010 buck. 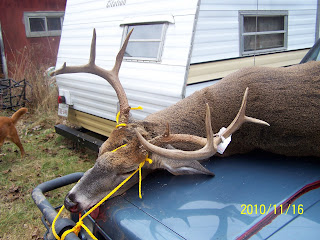 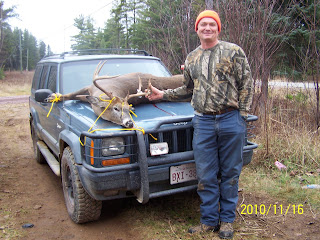 I asked Duane if he was going to get his head mounted and he replied that he thought this buck was too small! I would be overjoyed to take a SMALL buck like this one any day! Although this bucks rack was on the light side and had short brow tines,he also had a nice spread of nineteen and a half inches and a kicker off the back of his G1 that added character to the rack. In Duane's defence,if you know the calibre of white-tail heads he has on the wall,I guess you could understand why he's calling it too small. Although Duane was the only one to score on a nice buck,Dallas had three chances at two different four pointers and Jamie and I both had a long distance encounter with a nice heavy ten point buck that was just too far away. Jamie had left his post at lunch time to join me at my blind and that's when the buck decided to come out in front of Jamies stand location. Talk about poor timing! Jamie also encountered a nice little six point and what Jamie later described as an absolute "monster"at lunch time on another day while out doing some scouting.Unfortunately these bucks were also well out of range and all Jamie could do was look at them and admire them from afar.
The trail cam photos below show two of the bucks we were hunting this year. I apologize for the poor quality of the photos but unfortunately they were the only pictures I got of these bucks. The  second one on the right side of the page is the big boy I spent most of the season hunting. What is remarkable about this buck is the fact he wasn't the dominant buck in this area. There was a very large bodied buck in the area and we seen evidence where {the tracks} the buck in the photo was run off by the bigger buck. If you look closely at the photo of the buck I was hunting,you will see a tuft of hair sticking up on his rump as if he was prodded by a set of horns.I have seen this on other deer and this seems to fit the profile. The tracks of the largest buck were absolutely huge! There were also a couple of other nice bucks in the area that were travelling in the same area as the other two. The first buck on the left side of the page was a buck Dallas was trying to intercept but he's still running around out there. 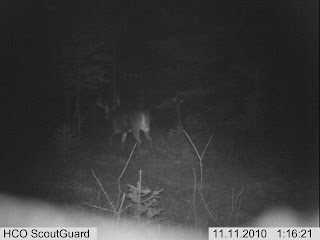 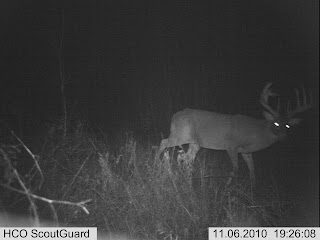 Although I wouldn't say 2010 was a good year for taking big bucks in our area,there were a few nice ones taken by some of the locals. A migrant hunter from the Moncton area shot a very nice wide and heavy nine point in Bronson that I never got a photo of but Trevor T. of Chipman got a nice even ten point while driving in to his stand just outside of Chipman. Trevor told me this buck had to be the stupidest buck in N.B. because he let Trevor stop the truck,get out and put his hunter orange on,load the gun up and walk out in front of his truck to take the shot! However you got him Trev,he's still a nice buck! 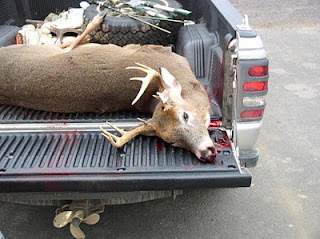 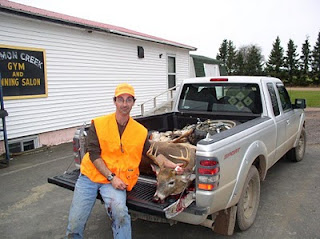 Another lucky hunter scored on a nice buck from the Coal Creek area. Matthew LeBlanc, a youth hunter travelling with his father,shot his first deer,  a nine point buck standing in a clear-cut. Matt dropped him with one shot at about three hundred yards! That's a pretty good shot, Matt! Hope you have lots more to come! The next photos are of Matthews deer. 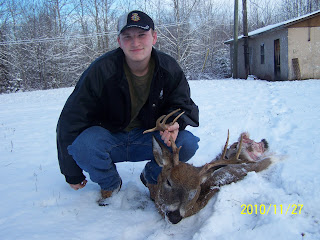 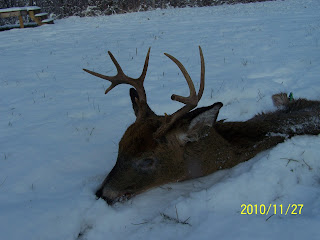 Kevin H. of Chipman got a nice wide nine point buck from the Harley Road and I've had an unconfirmed report of another young hunter that kill a huge buck in the Ripples area near Lakeville Corner that was over three hundred pounds field dressed! The word I got was the local butcher processed two hundred and twenty-six lbs.of meat from the buck for this young hunter. Unfortunately,I haven't got any photos of this buck,but if I get any I'll include them in a later post. The first deer registered in Minto this season was an oddity.Apparently,this deer was a doe with one horn in the middle of its head! In other words,a unicorn! Only in Minto!The local big buck contest had thirty-seven contestants and there were only two bucks registered.The winning deer was a six point, two hundred and three lb. buck. The runner -up was two hundred and one lbs. To me, that isn't a very good showing,considering the calibre of hunters that were entered in the contest. Two thirds of the deer hunters entered were what I would consider to be "hard core" hunters,with at least one good buck taken in the past. They all agreed the hunting was pretty tough in our neck of the woods this year.
A trophy white-tail buck is one of the most sought after big-game animals in North America. Each year tens of thousands of hunters take to New Brunswicks woods in search of these elusive creatures and in the process of doing so,many times these hunters rub each other the wrong way.Sometimes its locals pitted against migrant hunters and other times its locals challenging other locals for what is perceived to be "their' hunting grounds. Why would grown men and sometimes women, get down-right mean and quarrelsome over the pursuit of an old buck deer? When I first pondered this question, I thought it was an ego- related thing such as "mines bigger than yours", but the more I thought about it, the more I came to the conclusion it comes from a much deeper level. The emotions displayed sometimes between hunters comes from the instinct to survive. We hunters still carry this with us to a certain degree and many times when we encounter other hunters in our area,we instinctively feel a need to protect our territory from intruders. If a hunter could rationalize these negative feelings  and realize the origin of these emotions, he would soon realize the folly of his ways. Crown land belongs to ALL New Brunswickers and we hunters have to learn how to share it. It pretty much boils down to using a little courtesy and respect and most situations will resolve themselves. Another thing that pits hunter against hunter is the many debates about choice of weapons,hunting methods,hunting rules and a myriad of other subjects. Many times these subjects prove to be very divisive and we end up hurting ourselves  rather than improving our lot. So the next time you feel your hair bristle when you see another hunter in your area,try to remember that the emotions you are feeling come from a long ago time when things were very different. Take a deep breath,chill out and remember,that other hunter is most likely just like you, a regular guy out trying to down a big buck and get to experience one of the greatest thrills a man can have,wrapping your hands around a big New Brunswick white-tail bucks horns!
The following photos show some more vintage items I have collected over the years. The second picture  is a stylized, hand carved goose that can be used on a nite table to hold jewellery or smalls. This nice carving is signed M. Thamlov and is circa 1965. The first photo  is a beautiful porcelain plaque with a painting of two brook trout,circa 1960. 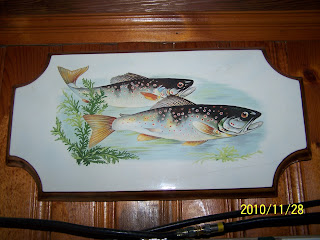 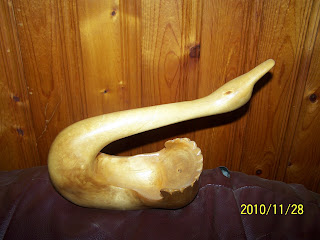 The next  items are two very nice cookie tins,circa 1950, lithographed with a king fisher  and an ivory-billed? woodpecker. Note the detail and beautiful colors of the lithos. 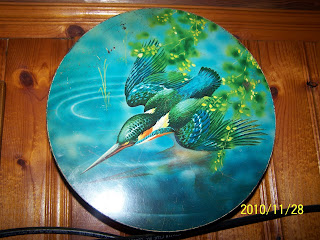 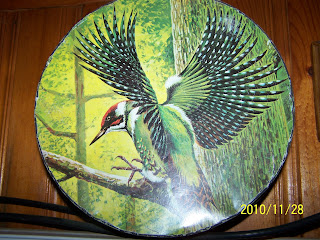 I have a ton of vintage items I have collected over the years that I will continue to include in my blog and I hope my readers will enjoy seeing more of this stuff in the future. If any sport,young or old,experienced or not,is looking for a guided adventure in New Brunswick, just give me a call and Ken and I will arrange a trip to the beautiful Grand Lake area that you will not soon forget!
Play Safe and Happy Trails to you!.......Until we meet again!
at November 27, 2010