The Cycle of Life 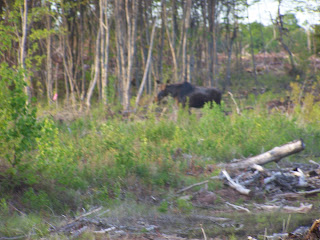 Summer has officially arrived and the weather has been very pleasant,with a nice mix of sun with enough rain to keep everything a nice deep green. The summer runs of salmon have now begun to enter the Miramichi River system after a delay of two or three weeks.Apparently this was caused by colder than normal water in the ocean,Anyway,the good news is they have arrived. This event follows a run of sea -trout that doubled the numbers of last year at most counting stations.We have been seeing many ducks and grouse with both species showing large broods indicating good nesting conditions this year. The moose and deer are starting to show up with their new-born young and the adults are starting to sport a nice new coat,as can be seen in the attached photo of a young bull moose.In a few days applicants of the annual moose draw will find out if they have been lucky or not.Keep your fingers crossed!So it looks like our summer season is off to a great start and we look forward to seeing you all out there in the Big Woods of central N.B.
at July 04, 2007