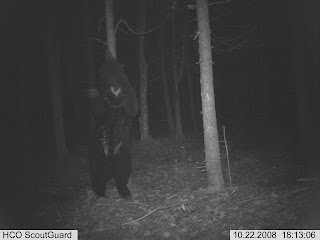 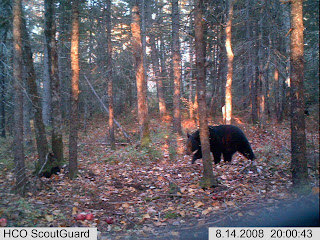 The 2008 deer season is fast approaching and Ken, Jamie,Dallas and myself have been scouring the woods in our hunting areas looking for big buck sign.We are seeing lots of sign and there doesn't seem to be any shortage of nice bucks around.These big woods bucks are very sensitive to human activity and Ken and I found this fact out the hard way.After seeing a buck open a scrape in one of the breeding areas,we decided to load up the area with bait,thinking we could eventually entice that buck to come in for a snack.Well,guess what.That buck wouldn't come near that site again after we set it up.But you can tell by the trail cam photos,we had a visitor.An unwelcome visitor at this time of the year.Now this is a nice bear,but that's not what we are looking for right now.Ken and I have never used trail cams before to try and get photos of some big woods bucks,and its proving to be quite a challenge.These bucks typically travel over quite a large area and its much harder to get them pinpointed for a photo.That's why most trail cams are set up on a food source.We now realize we need multiple trail cams in order to even begin covering some of the areas we hunt.Again,these bucks are covering an area of at least four or five square kilometers and you have to cover large areas of forest to figure out where they live and how they travel.We have most of our areas all figured out,but it's called hunting and you have to cover a lot of ground when hunting these brutes of the North Woods.If any readers are familiar with the Benoit's of Maine and their style of hunting,then their style can be seen to be very similar to how we hunt the big woods up here in new Brunswick.Ken and I feel we have a real advantage when hunting these big bucks because we know our areas so well,we can predict with some certainty where these bucks will be travelling.I will try to post on a more regular basis if I can in the coming weeks.I hope to have some nice deer to show in the coming weeks,so stay tuned!
at October 25, 2008