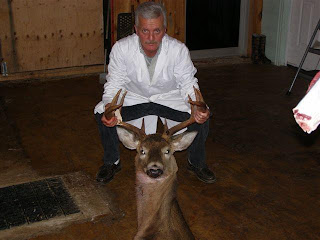 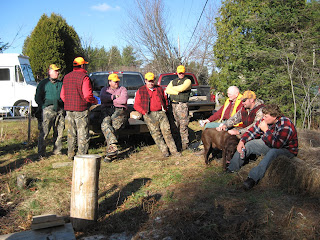 The 2008 deer season is slowly winding down and it has been a real roller-coaster of a season.The season so far this year has been a constant mix of warm,rainy weather mixed in with the odd cool frosty day.This constant fluctuation in the weather conditions did not help to get the deer moving and for the most part,up until the last couple of days,the deer have been in a regular pattern of feeding in the choppings and fields by night and bedding in the heavy woods and on the ridges next to the brooks during the day-light hours. A full moon last week did not help the hunting much either. Ken and I both agree that under conditions like these,a big bait pile will take a buck as easily as any other method of hunting. The photos in this post are of the Tolosky group from New York State and a picture of Glen Tucker,local meat shop owner,with a nice eleven point buck brought into the shop on Nov.15. Mike Tolosky and his extended family were up to New Brunswick for a deer hunt with us last week and it was very tough hunting. Their group managed to tag two small bucks,with `Pick`Tolosky,the family patriarch,getting his first deer in eleven years,as well as grand-son Josh getting a small buck also.Now these fine sportsmen came up here to hunt big North Woods bucks and Ken and the other guides put them on these big bucks but it just didn`t happen for them.I could go on at length about weather,the moon, last years winter and so on,but the bottom line is these big woods bucks are hard to get under ANY conditions. We have found the best way to get one of these old bucks is to sit and wait for him to make his rounds.If he`s not rutting,that could be a long wait. Unfortunately,the third week of the season was not a good week for the big bucks to be running. Now many paying Sports would have been very disappointed in the hunting last week because of the lack of movement and no doubt the Tolosky`s were also,but the difference with the Tolosky`s is they didn`t take their frustration out on the guides or the outfitters and tried to enjoy their hunt under the given conditions. Ken and I both agree that this group are not only true sportsmen and hunters,but a very nice family to boot! So I would like to take this opportunity to thank Mike and his family for choosing to hunt with us and we would certainly like to hunt or fish with you boy`s again some time in the future. There has been a few nice bucks killed this week locally and I`m sure there will be some more nice one`s taken before the season ends on Saturday.The predicted deer kill is just about on the mark for this year,according to the DNR.Of course the kill is down from last year because of the brutal winter we had,but that was to be expected.It`s funny how Nature changes and can provide either feast or famine conditions according to her whims.This year was the best I have ever seen for bright Atlantic Salmon,while the spring fishery for salmon was the worst in recent memory.Next spring promises to be an excellent spring for black salmon because of the large runs of salmon in 2008,IF the weather co-operates. So as it stands right now deer,grouse and rabbits are down a bit right now and moose,bear and salmon are up in numbers.Whatever species you are after or if you would like a soft eco-field trip,please contact me and I will arrange to get you out there in our great North Woods and experience the beauty of this great province we live in.
at November 19, 2008