A PERFECT START TO THE 2009 FISHING SEASON! 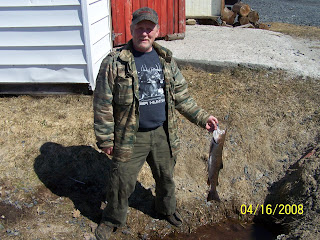 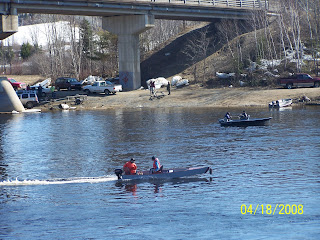 With about a week gone by in the new season,the fishing on the mighty Miramichi has never been better! Everyone who cast a fly caught fish.It didn't matter if you were a beginner or a seasoned veteran,the fish were co-operating! The first day,April15th,there was a fair bit of ice running and the water was a bit dirty,but the fish were still taking.The water level was fairly low and I'm sure this helped the fish find the flies and there were a fair amount of fish taken,especially in the lower part of the river around Blackville. After the first day,the ice cleared out and the water cleared up and then the fish were taking up and down the river with a fervor not seen in years.Some of the numbers of fish caught were nothing short of astounding. Many sports had several days when they had hooked their limit before lunch.The new rule of ten fish hooked is proving to be good for all who participate in this great fishery.The paying sports are usually satisfied and it takes pressure off of the guides and outfitters,as well as the salmon.After all,ten Atlantic salmon landed in a day is nothing to sneeze at! All the popular flies produced well.It didn't really seem to matter what was thrown at them,they snapped right on.I came down with a terrible cold,of course,and just fooled around casting from shore and caught fish everyday I fished.I didn't feel well so I wasn't really fishing that hard,just trying to enjoy myself,and I was literely hooking fish on the first cast many days.The photos in this post are of the boat launch under the Doaktown bridge and me with a grilse I tagged for WW2 vet Bill Pollick of Minto.Now Bill is in his ninties and can't get out much anymore,but he likes to have a spring salmon each year so I try to accommodate him,if I have any luck.Many sports and outfitters frown on tagging any salmon,let alone a spring salmon,but I believe it is a personal decision and I don't judge any fisherman whether he keeps a fish or not.Most of the grilse are males anyway,so it doesn't hurt the fishery much. We are getting some rain right now ,so the water will come up and be dirty for a few days,so the fishing may be slow for awhile.But when the water drops and clears up,many of the large salmon will be moving down river and will be taking flies. This is a good chance for a sport to break into the "over forty"club.There are many large salmon over forty inches in the system this year,so the chances are good that a sport might land one. As the season progresses,we will be putting out our bear baits and will be baiting well into June when we will start going after sea-trout.So whatever your fancy in the outdoor sporting life,just give me a shout and Ken and I will have you on your way to a great outdoor adventure in the Big Woods of New Brunswick!
at April 21, 2009