The April 15th fishing opener produced some good fishing for some and some cold and stiff fingers for others.As usual,I was on the MSW Miramichi with friends and family fishing from Doaktown to Carrolls Crossing and nearly everyone who could stand the brutal weather conditions caught fish. I will be the first to admit that I am a fair weather fisherman and I just don't enjoy fishing in the kind of weather we had the first few days of the season. On the other hand,wild horses couldn't keep me from the river on the first day of the season! The first morning started off a little slow but by the afternoon the water had dropped a bit and it seemed to put the salmon in the mood to take. I only fished for about two hours in the afternoon of the first day but I did hook a fish on the very first cast of the season. What a way to start things off! I didn't land that fish and I never landed the next two fish I hooked but some of my friends from Storytown and Chipman did manage to land a few while fishing at Big Hole Brook. I fished the opposite shore and watched the Beeks and their crowd catch several fish both from boats and from the shore. These boys always have a good crowd on hand and their howls and whooping whenever someone hooked one or lost one could be heard echoing up and down the river. As I said,I only fished for a short time and had to continue my journey upriver to Carrolls to meet some more fishermen who were arriving. I pulled the boat into the bogan just as one of the local guides was pulling in with his grandson and when I asked him how the fishing was he replied it was the first opener in memory that he didn't hook a fish! Now, I know this guy quite well and I know he is a good fisherman but  neither he or his grandson could get a strike that morning. I will say in his defence that they were calling it a day just as the bite was starting to turn on but it just proves that angling for atlantic salmon is not a slam dunk at any time,under any conditions. I spent the night in Carrolls Crossing and was up the next morning looking at the thermometer and I said to my fishing partner for the day that we should go to Tim Hortons and get a bite before we ventured out in that brutal cold. Usually,the day warms up towards lunch time and you don't get the guides freezing up as bad but not on this day! We hit the water about ten o'clock and we fished until about four with limited success. I managed to boat two grilse in the back channel at Sutter Pond but I really had to work for them. The fish were there and they were taking if you could keep your fly clean of debris and get it down deep to where they were holding. One sport caught about four or five while fishing in front of us farther down the run and I notice he was getting caught on bottom occasionally and I mentioned to my fishing partner that he was getting down to the zone and that was contributing to his success. His guide also had him well positioned and that was also helping with his success. This is a short clip of me landing a grilse on the second day.

I usually don't keep a spring salmon unless old Wes wants one or Donna A. wants to make fish cakes, so the grilse I caught on the second day all went back in the river. In days gone by,we would always keep a fish or two for a shore lunch or supper on the first day but nowadays keeping a grilse is frowned upon and many elitists will shoot you a look of disdain if they see you carrying a tagged fish. Although I am conservation minded,I don't find anything wrong with keeping a fish once in a while as long as it's a legally tagged fish, especially if it happens to be a persons first salmon.
I would like to comment on some of the antics I see every year on the river with regards to boating ethics. It seems that more and more boaters are being very inconsiderate when operating their crafts in the area where sports are fishing. If you want to troll,head down river where there is more room and this method of fishing is  more accepted. Up river,there just isn't the room and it usually raises the hackles on both sports and guides who are fishing in the traditional manner for that area and I can't say I blame them. Crowding and boats flying by fishermen without slowing down was also quite evident on the first few days of the season. Nobody,sports and guides both, likes this kind of behavior and people have to start using common sense and some courtesy before it gets out of hand. Here is another short clip of me playing a grilse on the second day of the season.As you can tell by this video,it was a cool day to be on the water and you really must be dressed for the conditions if you want to enjoy your outing.After all,even the best
fishermen have gaps in the action and that's when the cold will start to settle in your bones!
With bear season just around the corner,Ken and the boys have been out scouting already with hopes of finding some good bear sign.Last year at this time we had grass sprouting and bears starting to roam around grazing on grasses and weeds while getting their digestive tracts active again. During this stage,black bears don't respond to a bait because their guts just can't handle solid food that soon after emerging from their dens. A couple of years ago,Ken took a beautiful bear very early in May and it was one of the nicest bears I have ever seen taken. We had an early spring that year and the bears were active very early in the season. Ken spotted the track of this bear while out scouting and because of the location,he decided to try and take this bear so he could concentrate on getting the rest of the baits out. He killed this bear on the first evening in his stand and he was a little surprised at how quickly it came in. The fur on this bear was absolutely flawless,full and plush,like an expensive carpet. Again,Ken was able to take this bear so early because we had an early spring and he did his homework and found a bear that was ready to start feeding a little. Here is a photo of that bear. 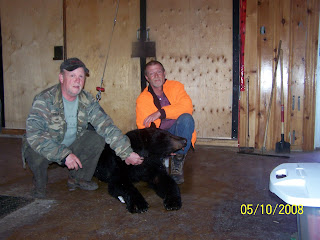 Ken and the boys always try to take a bear early so they can concentrate on the baits we put out for any sports who may want to hunt with us and they are definitely meat hunters and they don,t wait it out for a trophy sized bear. These guys were raised as meat hunters and they would much rather have a nice piece of meat than a big old black bear with meat tougher than boot leather! This works well for us because that leaves the larger bears for our sports to hunt. We had some really nice bears on our baits last year that we got on the trail cams that weren't taken and we are anticipating we will have some of these same bears showing up again this year. This is a photo of just one of the nice bears we had hitting our baits last year. 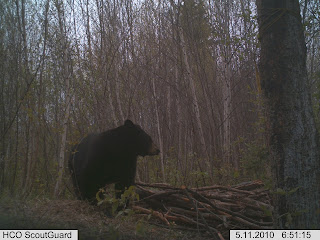 Our hunting territory has some very large bears roaming around and for those hunters looking for a real trophy,if you have the patience,you stand a very good chance of bagging one of these large bruins. Here is another photo of a nice bear on one of our baits. 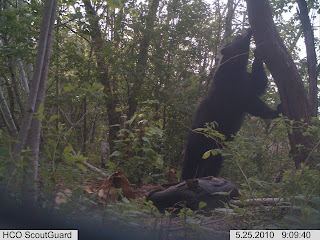 As you can tell by these trail cam photos,we have some very nice bears hitting our baits and these are the calibre of animals we are setting up for.
I have been busy searching for vintage items related to hunting and fishing and I have been finding some very nice pieces while travelling around southern New Brunswick. One of the things I recently acquired is a magnificent painting of two herd bull elk locked in mortal combat that was done by the late Moses Weaver. I have spoken of Mosey in past blogs and I was stunned when a picker I know visited my home with one of his paintings that he wanted to sell me. To say I jumped at this chance would be an understatement. This painting hung for a couple of decades in a smoking home and I am in the process of having it cleaned and when I get it done I will post a photo of it in a future blog, so be sure to watch for it. In the meantime,I will show my readers some photos of some other nice items I have picked up. This photo is one of a milk picture made in the style of Royal Bayreuth with a transfer decorated body of a stag in various poses. This item dates to the early nineteen hundreds. 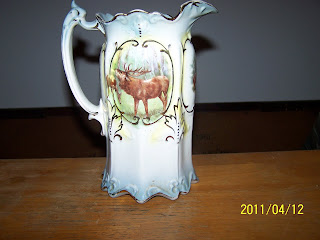 The next photo shows a framed print depicting deer grazing on the headwaters of the mighty Mississippi River.This item dates from the Fifties. 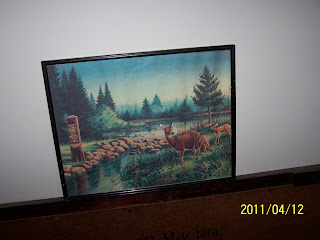 And last but not least,a photo of a very fine piece of chalkware modelling the bust of a doe and fawn. I'm not sure of the year this item was made because  the very good condition of this item makes gauging its age difficult. I have seen another one in a collection but it was nowhere near the condition of this one but if I had to make a guess,I would say this item was produced in the late Forties or early Fifties. 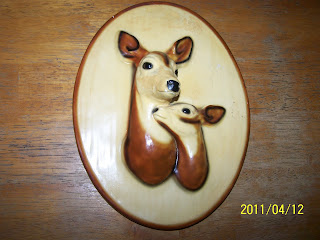 I hope my readers of this blog enjoy seeing these items and I will continue to show photos of my finds as I acquire them and at some point in the future I will be displaying most of these items in a separate area on our web site to make them available for purchase. In the meantime,if anyone is interested in any of the items you see depicted in my blog,feel free to contact me through my e-mail address and we will see if we can come to terms. For now,this is Dale Bauer bidding you adieu and wishing you Happy Trails.....until we meet again!
at April 21, 2011