It's That Time of Year Again! 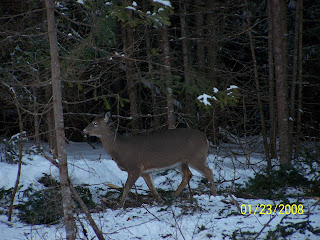 Yes,it's that time of year again.You know,flu season and the time of year when ol' wiley coyote is up to his dirty tricks.I have been out of commission for about two weeks now with a flu that kept me on my back and and out of the bush.I've just been nursing myself back to health by sipping broth and eating Tylonol.But Kenny has been out and about and he tells me that the deer are herded up now because of the snow cover and the coyotes are starting to move in on them,hanging around the edges waiting for a chance to pick off any young ones or those that are showing any weakness. I got one report from the village of Doaktown,which is about 40 kms. to the north,that a pack came right into the village and killed one of the town deer that the locals had been feeding.This is not the first time this has happened,but it's been a few years since the last time. I think when the snow pack reaches a certain level,they find it easier to move in on these town deer and pick them off. The next six weeks will be a critical time for our deer herd here and all we can do is hope for mild weather to take away some of the snow.Ken and I will also be organizing some hunts with the locals to try to thin out the numbers of those howling devils.Our motto up here is kill a coyote,save a deer. That's just the way it is.We have long held the belief that our coyotes up here in the Northeast are more wolf than coyote and recent DNA testing has proven conclusively that these animal are indeed approximately 65% red wolf, 35% coyote and 5% domestic dog. Its too bad the price of fur isn't higher,because we have some very capable trappers up here that wouldn't be long thinning their numbers out,but the price of fuel just doesn't make it profitable enough for serious trappers to go after them. One good thing the deer have going for them is they went into the winter in very good shape,as can be seen in the photo in this post.So we'll be keeping our fingers crossed and we'll be out there trying to call up some of those dirty buggers and try to provide some relief for our deer.The last two weeks of the 2008 deer hunt has been booked,but we still have some good time slots left for any sports looking for one of our big Northeastern Bucks.Just send an e-mail or give me a call and we will fix you right up.
at March 01, 2008