Ice Fishing Coming to a Close 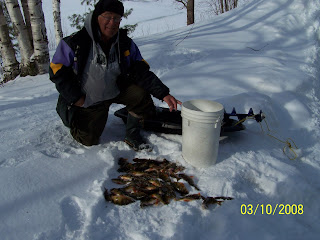 Winter is slowly winding down for another year here in New Brunswick,and none too soon! This year it seemed as if we were getting a storm every second day. The northern half of the province bore the brunt of the snow storms we had,with some areas piling up snow banks ten or twelve feet high. This does not bode well for the deer herd up north,with the deer biologist's predicting heavy losses in the northern reaches of the province. We are very lucky to have escaped the worst of this severe winter weather and the damage it does to the deer herd. The weather we had this winter affected the amount of ice fishing on the Grand Lake system.It kept even many of the die-hard fishermen home,but not all of them.In the photo for this post is one of those dedicated ice fishermen who refuses to be forced to stay at home. Louis L. from Rogersville has been retired for several years now and has routinely travelled back and forth from his home in Rogersville to Chipman and to the province of Quebec for the ice fishing.Now the trip from Rogersville to Chipman is around one hundred kilometers each way and Louis was making the trip two or three times a week. Why? Because we have some of the best fishing in the whole country,let alone the province. I said to Kenney the other day that we really don't appreciate the fantastic hunting and fishing we have in our back-yard. Louise has been fishing about five hundred meters from where Ken and I live,so I guess that would qualify as fishing in our back-yard. How good is the fishing? Well,as you can see from the photo,Louis has forty or fifty yellow perch that he caught in a few hours,and Louis does this each time he goes out. He is also catching chain pickerel,although he isn't targeting this species. Thats pretty good fishing in my book. The limit for yellow perch is one hundred per day and I can personally guarantee any sport can catch a limit any day of the week,during the summer season. As a matter of fact,I'm so sure of this fishery that I can say that any sport who books a fishing trip with us during the summer and doesn't catch a limit of perch will get to go again,for FREE! How's that for a deal? Although I'm talking specifically about yellow perch,the fishing is also excellent for chain pickerel,white perch and shad,when they are running,regular brook trout and sea-trout and of course Atlantic Salmon. The spring salmon fishing on the Miramichi is nothing short of world class! It's the only time of the year when you can routinely hook and release dozens of these mighty fish. Of course there are some days better than others,but overall it is still a fantastic fishery that can only be found in this part of the world.You can catch other species of salmon in other places ,but not the elusive Atlantic salmon with such consistency.If any of you sports would like to experience any of this fishing,single species or multiple,just contact Ken or myself and we'll have you hooking up in no time!
at March 16, 2008