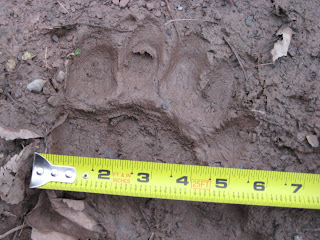 Things are starting to green-up here in central New Brunswick and that means the bears are out in the fields eating grass and sniffing around. There is certainly no shortage of big bears here in our area.The photo in this post is of one of three large boars visiting our baits in three different locations. I saw a nice bear of about 300 lbs. on a moose kill beside the 123 highway between Chipman and Doaktown the other day while travelling back from the Miramichi River. Good friend George P. told me he watched a large boar chase a smaller one off of the flat on the Gaspereau River across from his camp. One of the young lads I had working for me cleaning up after the flood said he walked out the logging road behind his house with his B.B. gun to try and get some squirrels,when out walks Mr. Bear about 50 yards from him! The kid said he turned and ran back to the house and never looked back! Speaking of the flood,this years freshet was the highest since 1973.The damage to property along the Saint John River /Grand Lake watershed will be in the tens of millions of dollars. I had extensive damage in my basement and it had to be completely gutted. We relocated to Carroll's Crossing on the Miramichi River for the last three weeks. We were over there anyway for the spring salmon fishing,but that didn't diminish the fact that it was a very difficult transition. I'm really glad to be back home and not living out of a duffel bag. I did a lot of travelling back and forth through the bush while staying at Carroll's,and I was seeing game every time I was out. Moose were running around everywhere and deer were out grazing on the sides of the roads. Lots of small game, too. The spring salmon season is done and the sea trout are just getting started. By all accounts,this spring salmon season was a poor one in comparison to recent ones. A prolonged run of ice and then high dirty water that stubbornly stayed that way for a couple of weeks made for hard fishing this year.But there should be a good run of sea trout this year as this fishery continues to improve. Although Ken and I have been very busy tending bear baits,we have also been placing salt and mineral blocks at our stand locations for deer. We were really happy to see that most of the big bucks we had scouted last year survived the winter in good shape. We have been seeing some really nice buck sign in all the areas we hunt,so there should be some nice racks running around next fall. I would encourage any readers to contact me if you would like to spend a day or a week in the woods or on the water here in beautiful New Brunswick. You can be guaranteed to take home memories to last a lifetime!