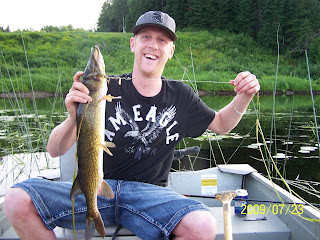 Summer is slowly rolling along,with the weather being very similar to last year-WET! This is good news for the salmon and trout,as the high water conditions and cloudy days helps to keep the water temperature down to a very comfortable level for these two species of fish.But that doesn't necessarily mean such conditions are good for the fishermen! The salmon have a tendency to run right on through to their spawning areas,without stopping to rest in the pools and perhaps,with a little luck and skill,be tempted to take a fly.The trout also will be free to move about in their habitat and not be forced to hold in front of the spring brooks,where the temperature is a bit cooler and more to their liking.This makes both of these species of fish a little harder to take. The rule of thumb in these conditions is to fish longer and try to cover more ground. Being in the right place at the right time was never truer than in these circumstances.There are lots of salmon and grilse in the system and more coming on the tides each day and there are some nice fish being caught,its just been a little harder fishing. The high water conditions has been making the pickerel fishing a lot tougher, too
Again,the fish are more dispersed throughout their habitat and you have to spend a little more time to find them,but when you do,some nice fish can be taken.The photo in this post is of my son,Curtis, with a trophy sized pickerel he caught while introducing his girlfriend to the pickerel fishing in our area. 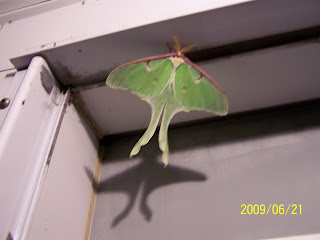 He caught a few good sized ones and then he hooked the one in the photo.He missed it on the first take,which is quite common with pickerel.He knew it was a good fish and he told his girlfriend to watch as he cast to it again.This time the water parted from a distance of about six feet and the water exploded under the lure as the fish struck with such ferocity and violence that it shocked Curtises' girlfriend.After landing the fish and measuring it,Curtis carefully released this great fish to catch another day.Curt explained to his girlfriend that this pickerel was six or eight years old and it's a shame to keep them,especially if you aren't going to eat them.Take a photo and release the fish.At least then you can have bragging rights and provide some other angler the thrill of catching a trophy sized pickerel. Around our fishing area,a nice pickerel is one over twenty inches.One like Curtis caught,twenty-five and a half inches,is considered to be trophy size.We regularly catch ones over twenty inches and we will catch several over twenty-four inches throughout the summer.Now there are people who think you should kill every pickerel you catch and the only reason they would ever fish for them would be for that very reason. Usually these fishermen are hard-core trout and salmon fishermen who are convinced that pickerel will ultimately destroy all their trout and salmon fishing because they will prey on these species.Pickerel will feed on these species,but they usually occupy different habitats and don't impact much on each other.I had a chap tell me the other day that smallmouth bass fought better than a salmon and he called them the "king of gamefish".I had to fetch him up at that point and I told him I would rather fish pickerel than sm.bass any day.He asked me why I felt that way and I told him I liked the way pickerel took the bait and the fact that they were usually easy to catch.Also,pickerel are right in my back yard,so I don't have to travel to fish them. So,if you ask me my opinion,I will tell you every time that pickerel are trophy fish and I'll argue the point until I'm blue in the face! I have included a good picture of a Luna moth in this post also. They really are quite beautiful! The deer and moose are busy caring for their young and trying to stay clear of the flies,which are very bad this year because of all the moisture.There are lots of moose in our area and the deer are making a slow recovery from the devastating winter of two years ago.It is encouraging to start to see more deer in some of the areas that were hard hit with winter kill.Our government should be doing more to help both the deer and salmon in the Grand Lake area,but that is for another post.We do full and half day fishing and sight seeing tours on Salmon River during the summer and early fall for pickerel and perch and we can guarantee you will catch fish,period.So if anyone would like to spend some time on the water with us, just send me an e-mail or give me a call and we will make the arrangements.Tight Lines!
at July 31, 2009