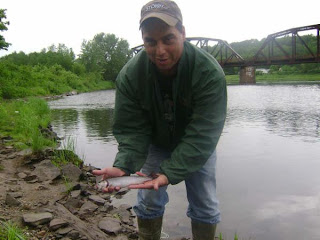 They say time flys when you are having fun and here it is the middle of July already! Ken and I have both been right out straight for the last couple of months,as both of us had an unexpected work load to contend with. I haven't been able to post anything lately because of computer problems,as well as being away on vacation for the last week. I know that puffins are not considered game birds,unless you are from Iceland,where they are still hunted,but I had to mention the colony I visited on Machias Seal island near Grand Manan.
Just having a colony of these delightful birds here in New Brunswick is something all of us native sons should be proud of.Being able to visit them in their mating season in their only nesting colony is a priviledge everyone should try to participate in at least once in their lives.We landed on the island after a boat ride of about an hour and a half on a beautiful day and we were able to visit and observe and take pictures for another hour before we had to leave.There are very strict rules for visiting these birds while they are mating and raising their young and we were very happy that we were able to visit the island and watch the birds from the blinds that the students and biologists use when studying these beautiful little birds.We were also able to observe razor billed auks and common murres in the same habitat. I can only say if you ever get the oppportunity to take this trip,you will never regret it. It truly is a once in a lifetime event. The salmon fishing has been off to a rather slow start this year compared to last year. There have been some very large salmon entering the Miramichi river system,but the grilse run has not come in yet leading some to wonder if we will get anything close to the numbers we got last year.Usually when we get a good run of grilse one year,the following year there is a good run of large salmon and this pattern seems to be holding true.That being said,we should still get some good numbers of grilse coming in as the water conditions a near perfect.Lets hope for the best and pray that last years fantastic run of fish wasn't just a fluke! Last month Ken and I had the priviledge of guiding two fine gents from Darthmouth,N.S. Ed Clarke and his uncle Bob,came up for a little trout fishing and they managed to catch some pan sized speckles,as well as some nice sea trout.Now the sea-trout

that the boys caught were not the huge lunkers that traverse our better streams because these fish typically run early in June up to their spawning beds and will stay there in these protected waters until fall when they will spawn.But we did manage to catch up with some smaller ones that run a little later and will hang around the mouth of the spring brooks.Ed and Bob fished the Gaspereau,Cains and the MSW Miramichi 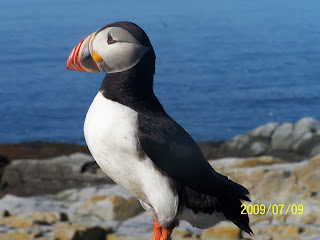 rivers over the course of the day and were into fish on all three rivers.Ken and I wanted to try to give them a taste of what the fishing was like on these different sized rivers because these boys usually fish small lakes back home.I think Ed and Bob had a good time visiting with us and I know Ken and I both really enjoyed guiding them as they are both great guys,as well as being very good fly fishermen.They are also very conservation minded,having released all their trout to be caught another day. We really hope to fish with these two gents again,perhaps in the spring for black salmon.We would love to put together a trip to the Miramichi for these two guys and perhaps a friend or two. Ken called me up the other night quite excited and told me to come over with my camera,as he had something he wanted to show me.When I got there,he pointed to a rather large moth on the side of his porch and asked what it was and I told him it was a Luna Moth.Although these beautiful lime green moths are fairly common,Ken had never seen one before and was quite fasinated by it.I can understand why he had never seen one because in this part of the country their life span is only seven days long and they only produce one generation per year. They are fairly large,having a wingspan of 3.5-4 in. wide,so if you see one,chances are you will know what it is because of its size and lime green coloration.The pickerel bite has been very good lately,as the gaspereau have gone out,so the food supply is dwindling.My son Curtis was out guiding a couple last week and they caught some very nice ones in the 24-26 in.range.If you would like to get out on the water or out in the bush for a trip in our beautiful neck of the woods,just give me a call or shoot me an e-mail and Ken and I will have you into the fish or on the game.See you there!